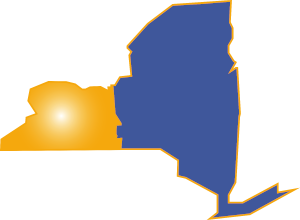 Join the movement to give Greater Western New York the freedom it deserves.

The Greater Western New York Region can become independent. There are many different ways this can happen. In all likelihood, true independence will require a patient and deliberative course of action that involves each of these methods at various points in the process.

If the United States were governed as a single state, we wouldn’t have the opportunity for state governance to vary according to the culture of a local area. The purpose of having state lines is to allow this variance.

The Greater Western New York border was initially established by Preemption Line following the Treaty of Hartford between the States of New York and Massachusetts on December 16, 1786. After the formation of new counties and the shifting of county lines, the region now contains 17 counties.

The 17 western-most counties in New York State not only have a shared history, they have a shared geography that gives them different priorities than other parts of the state. It is no longer reasonable to expect those who reside in the original part of the State to set aside their priorities to placate those who live in the western part of the State. Just as those in the original part of the State should focus on their own needs, so, too, should the people of the Greater Western New York Region be allowed to concentrate on their own wants and desires.

This is the definition of independence. It is mutual. It is self-defining. It is, ultimately, the kind of freedom America’s Founding Fathers envisioned for all our country’s citizens.

A Spectrum of Paths Towards Growing Independence:

What does independence mean to you? It generally means the freedom to live the life you want, teach your kids your values, and build a community of like-minded individuals without undo interference from those far removed from your beliefs.

It turns out there are plenty of paths to achieve independence. Each builds on the other. Can you skip a step? In the ideal world, yes you can. But in the world of patience and diligence, accomplishing this goal takes time as it comes easiest with a series of incremental wins. Every win moves you closer to the objective.

Done correctly, this process should transcend party politics and create a win-win opportunity for the interests of both sections of the current State.  Click the drop-down links below to see why:

This is a political strategy long practiced within the United States. We see it happening today when individual states and cities decide they will not enforce existing federal law. Examples in “sanctuary” cities that openly house illegal aliens or openly allow firearms deemed illegal by federal law. Perhaps the most recent example is New York State (among other states) deciding it will no longer prosecute federal drug laws by “legalizing” recreational marijuana.

This same strategy was practiced in New York State by several counties regarding the hastily passed SAFE Act. This controversial law was so flawed, sheriffs in individual counties spoke out against it and refused to enforce it. Ultimately, the most egregious aspects of the SAFE Act fell away in court.

It’s important to note that nullification only targets specific laws. All other laws remain in place.

As you can tell, this path is already being taken. Most recently, Cattaraugus County declared itself a “Constitutional County,” in essence, taking a symbolic stand in favor of nullifying any State or Federal actions that run contrary to the U.S. Constitution. If you’d like to learn more about this, click here.

THE MOST LIKELY PATH - AUTONOMONY!

An “Autonomous Zone” is defined geographic territory, much like a county is defined, within an existing state that has full and complete control over all legislative, jurisdictional, and governance matters within its borders.

This can be accomplished solely within the existing political infrastructure of New York State. Both the New York Senate and the New York Assembly would have to pass bills designating the Greater Western New York Region as an independent autonomous zone.

As an autonomous region, we would still be affiliated with New York State and certain assets (like the SUNY schools and State prisons as well as the transportation and energy infrastructure) would continue to be operated on a “joint venture” basis. All other policies, rules, and regulations would be subject to a terminal sunset provision long enough for the new autonomous government to reconsider their relevance and, if necessary, replace them.

The idea of autonomy is different than nullification because it would require addressing laws and regulations on a one-on-one basis and relying on a court ruling to win your case. In addition, while nullification can be easily reversed with new legislation or executive orders, it would be more difficult for the State to overrule autonomy, assuming the autonomous legislation is constructed properly.

There is currently a bill proposed by Assemblyman David DiPietro and supported by several New York State Senators and Assemblymen that would split New York State into three Autonomous Zones: New York City, Long Island, and the rest of the state.

THE DREAM PATH – A NEW STATE!

New states and state lines have been relocated many times in American history because it just takes a simple majority approval in both the relevant state and both houses of Congress.

The idea of statehood is different from creating an autonomous zone because it reflects a more permanent solution to the problem of virtual disenfranchisement of Greater Western New York Citizens that has been growing now for several generations.

There is currently a bill proposed by Assemblyman Stephen Hawley that would place a question on the ballot asking for a simple up or down vote on the idea of splitting New York State into two separate states.

Get Involved
Learn More
Get Emails

This is the site for citizens of the 17 western counties in New York State that historically make up the GreaterWestern New York region, a region recognized by the New York State Department of Health, the New York Press Association, and other groups. These include the counties of: Allegany, Cattaraugus, Chautauqua, Chemung, Erie, Genesee, Livingston, Monroe, Niagara, Ontario, Orleans, Schuyler, Seneca, Steuben, Wayne, Wyoming, and Yates.